About Karlene
Born and educated in Chicago, and a lifelong resident, Karlene feels she has been greatly nurtured by the beauty of the lake, the parks and the vibrancy of city life.
Along with her love of creating art, which began in grammar school, has grown a deepening respect for American Indian spirituality and traditional practices. She has found that Native Americans have a generous and welcoming spirit for those who sincerely seek to understand and respect their ways. She believes that by coming to an understanding of America's native peoples, we can more readily appreciate indigenous peoples all over the world and their deep understanding of nature's many levels of life.
Very helpful to her art work have been many trips to national parks and several wildlife refuges in North America, which were guided by excellent wildlife biologists, archeologists and geologists. Supporting these trips, have been visits to several natural history museums in the United States, but particularly, Chicago's Museum of Natural History , and Aquarium, where one can easily take advantage of sketching the great diversity of live specimens or those preserved in life like dioramas.
In an age that is severely threatened by the abuse of these natural ties, she believes that art is one way to communicate and share with others, not only the beauty of our world, but the awareness that human life is, and always has been, completely dependent on a humane and reverent integration with the natural world. 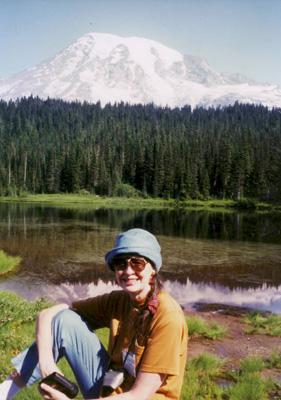