The Phoenix and the Rose
1 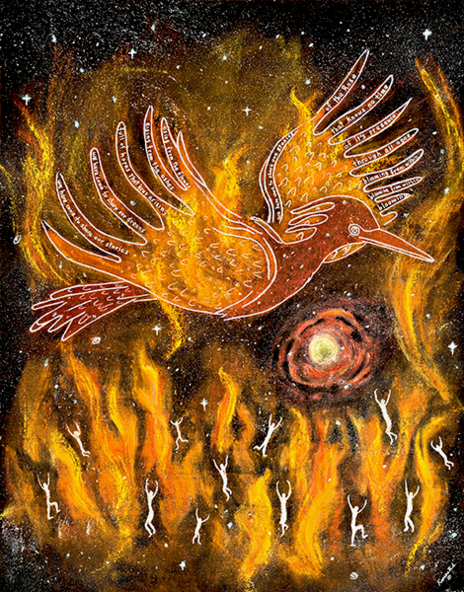 This piece was inspired by a poem that was read aloud after
dinner on the last evening of a weekend retreat on reconcilia-
tion and healing in Albuquerque, New Mexico. I jotted down
some notes and images while listening, but later, revised the
text and images, until they ended up as pictured here.
The Phoenix is a mythical, sacred firebird found in mytholo-
gies of many ancient civilizations, particularly those in east-
ern regions of the world. Stories are told of its life cycle last-
ing anywhere from 500 to 1000 years. At the end of the cycle,
it is said to build a nest and then ignite itself. It remains dead
for three days, after which a new, young Phoenix arises, born
from its own ashes.
The Rose in this painting, is visualized by the Ring Nebula
which has the shape of flower like petals, and is 2300 light
years from Earth. Scientists tell us that cosmic nebulas play
a strong role in the birth and death of stars and that all life on
Earth originated from the life and death cycle that exists
throughout the universe. The Ring Nebula, therefore, seemed
an appropriate "bridge symbol" for the theme of this painting
which is resurrection, hope and the sense that life is constant-
ly being renewed.  The Phoenix and the Rose are often associ-
ated together in images of gardens of paradise, particularly in
eastern cultures.
In this image, not only is the Phoenix being resurrected, but each individual  has been given a path through the "fires" of life to find a way to renewal and healing.  Often this means some type of deep change for our own renewal, or for the sake of
another  to become, we hope, signs of blessings, love and encouragement to others.
.